Pioneer - Rebel - Genius. Radioactive is the incredible, true-story of Marie Sklodowska-Curie and her Nobel Prize-winning work that changed the world starring Rosamund Pike and Sam Riley. 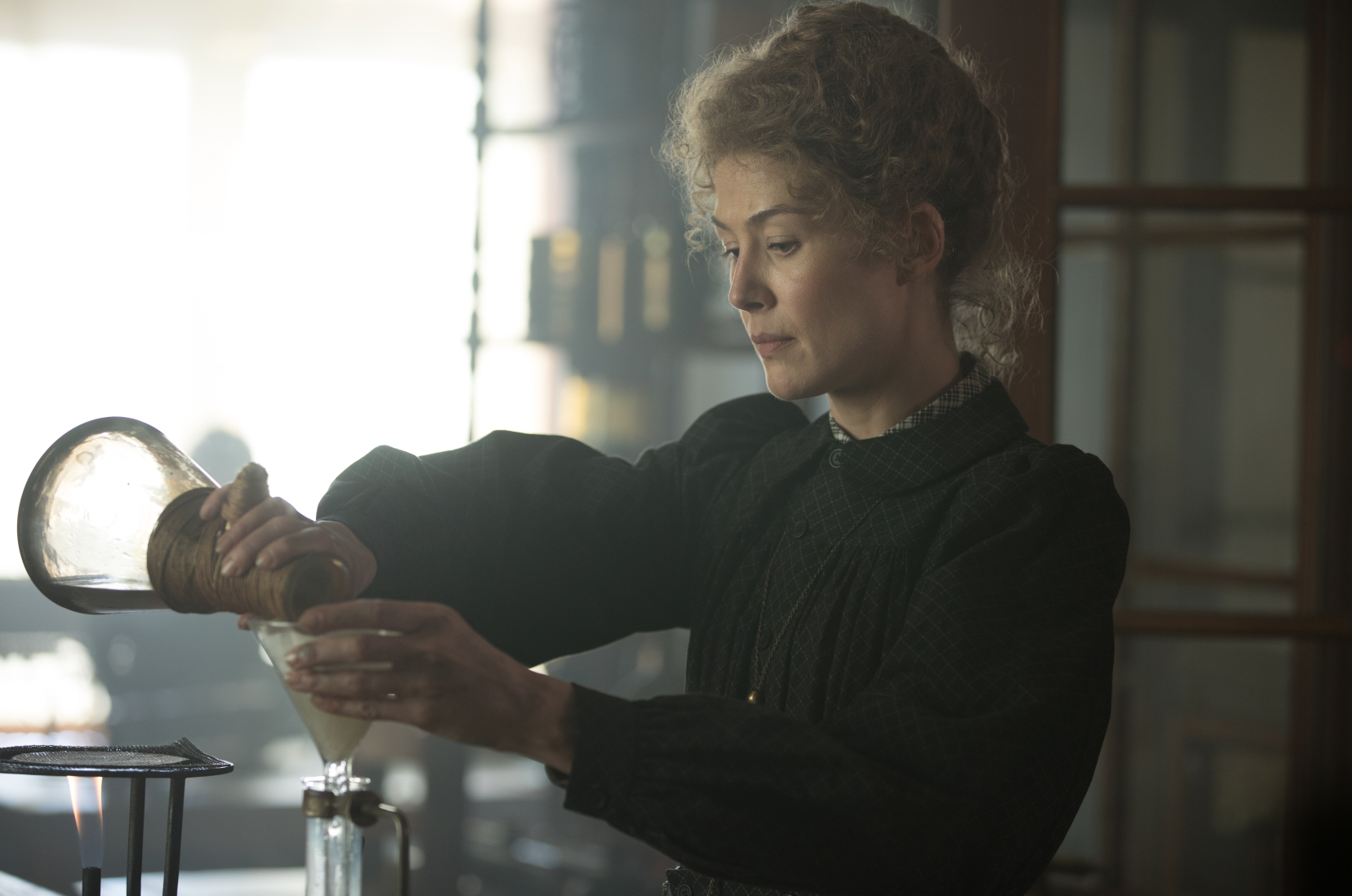 From the 1870s through to modern day, RADIOACTIVE is a journey through Marie Curie’s (Rosamund Pike) enduring legacies – her passionate partnerships, scientific breakthroughs, and the consequences that follow.

In late 19th century Paris, Marie met fellow scientist Pierre Curie (Sam Riley). The pair went on to marry, raised two daughters and changed the face of science forever by their discovery of radioactivity. In 1903, the pair jointly won the Nobel Prize in physics for their discovery, making Marie the first woman to win the esteemed prize. After the death of her beloved Pierre, Marie’s commitment to science remained unwavering and her work went on to win her a second Nobel Prize.

This is a bold, visionary depiction of her extraordinary life, and an exploration of the transformative effects of how Curie's work has impacted the defining moments of the 20th Century.

To inform and inspire future generations of students, and to honor the scientific work of Marie Curie, Amazon Studios and Blueshift Education have developed a set of lessons for upper middle and high school educators to incorporate clips of Radioactive within the classroom. These inquiry based lessons support units on the history of science, the process of scientific discovery, as a tool for strengthening critical media literacy, and for thoughtful reflection and connection to the legacy of her work today. Each lesson includes classroom appropriate curated short film clips, primary and secondary source material, and inquiry based activities for students to delve deep into these lesson topics.

MARIE CURIE: THE IMAGE AND THE REALITY. Students will learn about the early years of Marie Curie and her journey as a scientist, as a partner with Pierre Curie, and as a mother at the turn of the 20th century. Through their discovery students will apply a critical media literacy lens to Radioactive and compare this depiction with select primary and secondary source materials on Marie Curie.

In this lesson students will learn about the power of observation and the need for creativity in sparking scientific inquiry. Students will look closely at Marie and Pierre Curie’s process for discovering the phenomenon of radioactivity, their identification of radium and polonium, and develop their own scientific investigations, and models for explaining radioactivity.

From nuclear energy and the atomic bomb, to medical applications of radiation, students will reflect on the legacy of Marie Curie’s discovery of radium and share their views in a Socratic Seminar.

Selected scenes from the movie

Radioactive - Clip 1: Beginning of Their Partnership
10:23

My Name is Pauli Murray

A look at the life and ideas of Pauli Murray, a non-binary Black lawyer, activist and poet who influenced both Ruth Bader Ginsburg and Thurgood Marshall.
View resources
Middle School , High School, College

One Night In Miami...

One Night in Miami is a fictional account of one incredible night where icons Muhammad Ali, Malcolm X, Sam Cooke, and Jim Brown gathered discussing their roles in the civil rights movement and cultural upheaval of the 60s.
View resources
High School, College

In this intimate yet epic love story filmed over two decades, indomitable matriarch Fox Rich strives to raise her six sons and keep her family together as she fights for her husband's release from the Louisiana State Penitentiary, commonly known as Angola.
View resources
College

Single mother, Sandra, escapes her abusive partner with her two young children, only to find herself trapped in temporary accommodation. After months of struggling, she decides to self-build an affordable home, but rebuilding a life from the ground up cannot be done alone.
View resources
High School, College

A balloon pilot and a scientist find themselves in a fight for survival while attempting to make discoveries in a gas balloon in the 1860s.
View resources
High School, College

All In: The Fight for Democracy

ALL IN: THE FIGHT FOR DEMOCRACY examines the issue of voter suppression in the US. The film interweaves personal experiences with activism and historical insight to expose a problem that has corrupted our country from the beginning. With the expertise of Stacey Abrams, the film offers an insider’s look into the barriers to voting.
View resources

DoGoodery is a consulting agency that works with partners who have an authentic commitment to doing good. We ideate, create, and execute initiatives to improve lives and reduce inequity with empathy, joyful collaboration, and a research-based approach.